Uncategorised > MEAA: “The balance needs to be tipped back to the public’s right to know”

MEAA: “The balance needs to be tipped back to the public’s right to know” 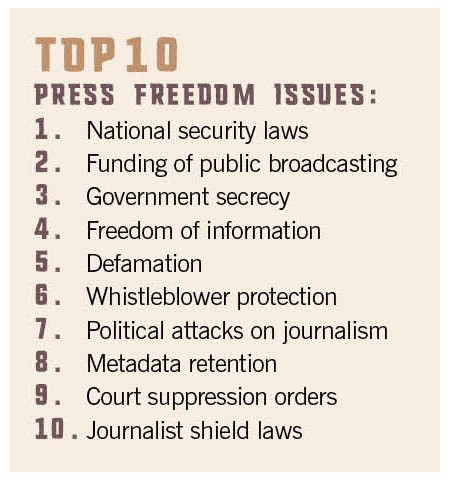 The top 10 Press Freedom issues in a survey of journalists and the public by the MEAA and published on World Press Freedom Day-along with the annual report this year with a chilling title- Criminalising Journalism:

“Press freedom in Australia has deteriorated over the past decade according to a survey of more than 1200 people conducted by MEAA.

The survey, which was conducted online by MEAA between February and April this year, is being released on UNESCO World Press Freedom Day, May 3.

The survey was open to all members of the public, with 410, or almost a third of the respondents, identifying as currently working as a current or former journalist (retired or unemployed), or journalism student.

“There is a widespread concern about press freedom in Australia”, said MEAA chief executive, Paul Murphy. “Journalists and whistleblowers bring important stories to light in the public interest. Increasingly they face criminal prosecution as a response.

“Journalism is under attack with national security laws, metadata retention, poor protections for whistleblowers, the over-use of suppression orders by courts and flawed freedom of information processes all combining to make it harder for journalists to do their job.

“It is difficult for journalists to keep pace with all these issues, and there is clearly a role for MEAA to continue to campaign for press freedom and for employers to educate and support their editorial staff in navigating these minefields.”

Both journalists and non-journalists identified national security laws which impact on public interest reporting as the most important press freedom issue, with roughly one-in-five of both groups of respondents ranking it the top issue. Second for both groups was funding of public broadcasting, followed by government secrecy.

“Legislating for Australia’s national security has drifted a long way from the fight against terrorism,” Mr Murphy said.

“The latest laws before the Parliament have gone so far as to criminalise innocent receipt of information. Those laws have been rightly condemned not only by every media organisation in Australia, but also by international bodies such as the United Nations, Reporters Without Borders and Human Rights Watch.”

“The balance needs to be tipped back to the public’s right to know. Journalists and whistleblowers deserve protection, not prosecution, for acting in the public interest.”

READ MORE in MEAA’s annual report on the state of press freedom in Australia: Criminalising Journalism at pressfreedom.org.au Download a .pdf of the report here.”