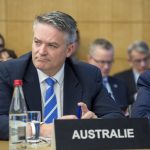 At a meeting in Melbourne today with the minister responsible for OGP co-ordination, Special Minister of State and Minister for Finance Senator Cormann, a delegation led by Network Steering Committee Chair Dr Ken Coghill called for action to publicly demonstrate that the government is serious about open government reform.

Action along these lines could include

Other points raised by the delegation

The Network and its members have supported the OGP initiative throughout, encouraged civil society and public participation, and provided support and input during the planning phases and implementation of commitments contained in the first plan.

In proceeding with OGP membership, the Prime Minister adopted the principles stated in the OGP Open Government Declaration. Australia along with 74 other OGP members is committed to fostering “a global culture of open government that empowers and delivers for citizens, and advances the ideals of open and participatory 21st century government.”

The OGP is a useful vehicle, but only if the Government uses it as such.

Adoption of commitments based on the Open Government Declaration principles has the potential to enhance confidence in government.

Australia’s performance to date has received little attention in political circles and the media. However a gap, particularly a significant gap, between our words and deeds could be cited as another reason for declining trust and confidence in government and political leadership.

The opportunity has been missed so far for a whole of government embrace of the concept of open government with strong, visible support from ministers in public discussion about the OGP.

There is frustratingly limited public awareness of the OGP initiative and low level of public and civil society participation in the development and implementation of Australia’s planned reforms. There has been no attempt by government to tell the open government reform story.

Comments from the Independent reviewer Daniel Stewart about the first plan drew attention to gaps and weaknesses- for example, vague commitments, none of which are transformative, limited public awareness of the OGP initiative, absence from participation by groups representing indigenous, rural communities, disabled, elderly or otherwise politically or economically marginalised people.

The ‘business as usual’ approach by lead agencies to engagement rather than ongoing collaboration in the spirit of partnership is a concern.

Those who have participated in the consultations on commitments to date have not received encouragement, response or explanation about why many suggestions for improvement were not acted upon. On some commitments nothing has been heard for months. On one (3.1 Attorney General’s Department :Information access laws and practices fit for 21st century) there has been no engagement with anyone outside government for 12 months.

The Australian Government has played virtually no role in the international OGP movement.

A comment on the meeting from Dr Coghill will be available shortly.