News > Next Steps on Australia’s Path to Open Government

Next Steps on Australia’s Path to Open Government

When the Interim Working Group agreed to go ahead with a plan to establish a Multistakeholder Forum by the end of June, I said it would be ambitious. It’s still ambitious. And it’s still doable. From here, at least, it does look like it’s still on track.

On Wednesday 17 May, Department of the Prime Minister and Cabinet convened a public workshop. The workshop was to bring people who are interested in Open Government together and see what they think about a proposal to design and create a Open Government Multistakeholder Forum. The make up, functions and appointments of this Forum were all reviewed and discussed.

Around 40 people signed up to attend the workshop in person, around 200 more reached through livestreaming parts of the workshop, as well as via twitter.

Shreya Basu, the Asia Pacific regional civil society coordinator for OGP presented a potted history of OGP, Will Story from PM&C picked up from there with an outline of the Australian OGP journey and went on to introduce the purpose of the meeting, to canvas opinion.

Shreya led the way, reading through the Multi-stakeholder Forum design and implementation proposal. Q&A from participants revealed some participants interested in a specific aspect of Open Government movement, some knew quite a bit  about OGP, and at least two came without knowing much about OGP.

A number of areas proposed were reviewed without comment. So, to make the most of the short time frame for active consideration of the proposal, we dived into three main areas, in 3 groups, around 3 tables. Interim Working Group Members facilitated table discussion. Kayelle from Department of Finance and I led conversation on the composition of the multistakeholder forum.

In our group, there was some wish to raise issues in general terms, which I captured, quickly, filling post-its and posting on a large sheet of paper. We then encouraged those our table to dive in and look at how their thinking might affect what was written in the proposal. How would they change the wording to improve it? This was successful strategy in so far as people presented and agreed on specific changes, which we then proposed as amendments. Although we didn’t linger, we still didn’t have time to run through everything, and some big issues such as appointment terms & a suggestion about staggering appointments, were not discussed in detail.

When livestreaming was due to start again, I joined the other table facilitators and Shreya on the podium, to present back to the group, and our livestream viewers.

Thanks for joining us for the #OGPChat & #OGPAu livestream we had over 200 viewers tune in.

The Working Group will review your feedback. pic.twitter.com/c1s85OcPR5

Staff at Prime Minister and Cabinet quickly followed up to share these notes with participants along with an email Thank You message for taking part on Friday afternoon. It’s great that PM&C have already thanked people for coming along and taking part.

Government will now consider the recommendations and administer a process to establish the Forum. We expect that information about this process will be available from the OGP Australia website in the coming days, and that the Forum will be appointed by the end of June, 2017.

Shreya transcribed all our table discussions’ notes and summaries, which she then presented as a guest at the next day’s Interim Working Group meeting. 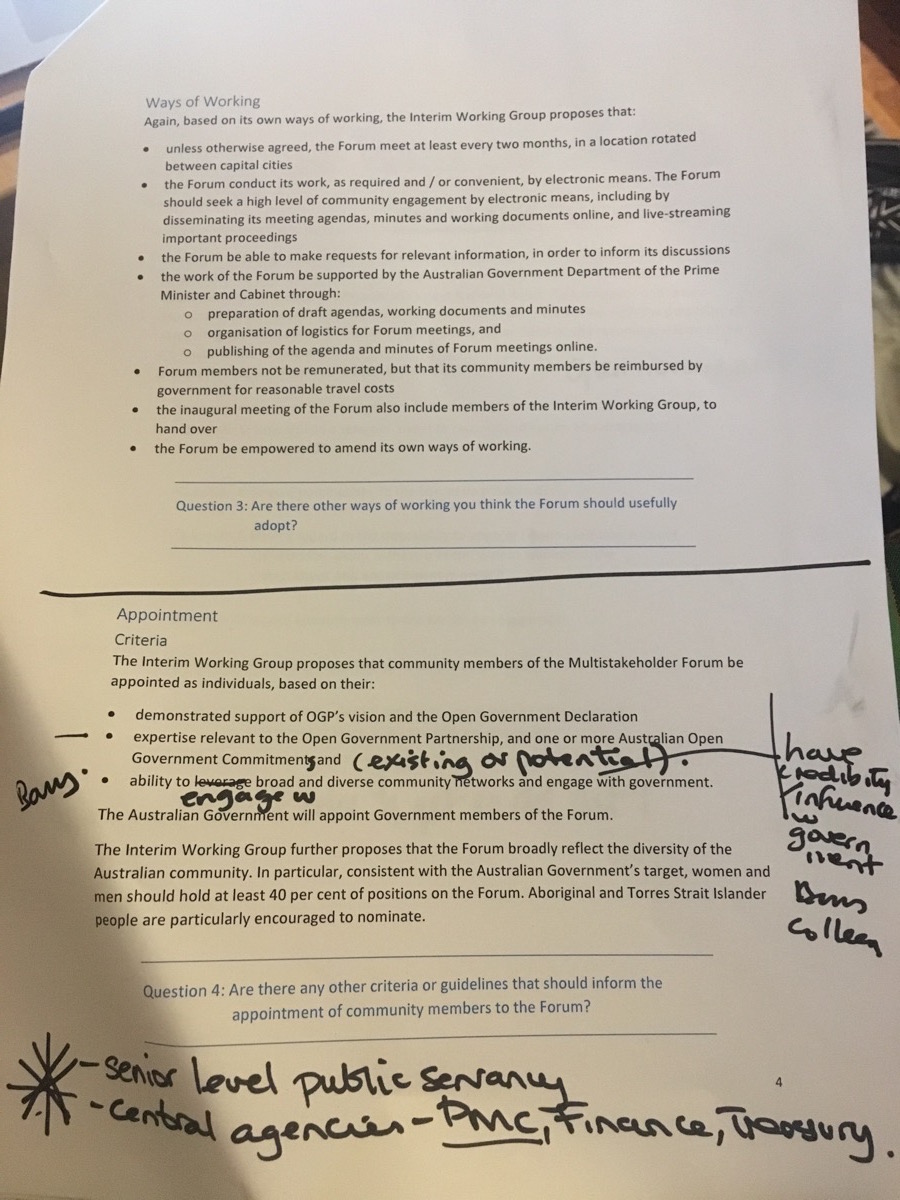 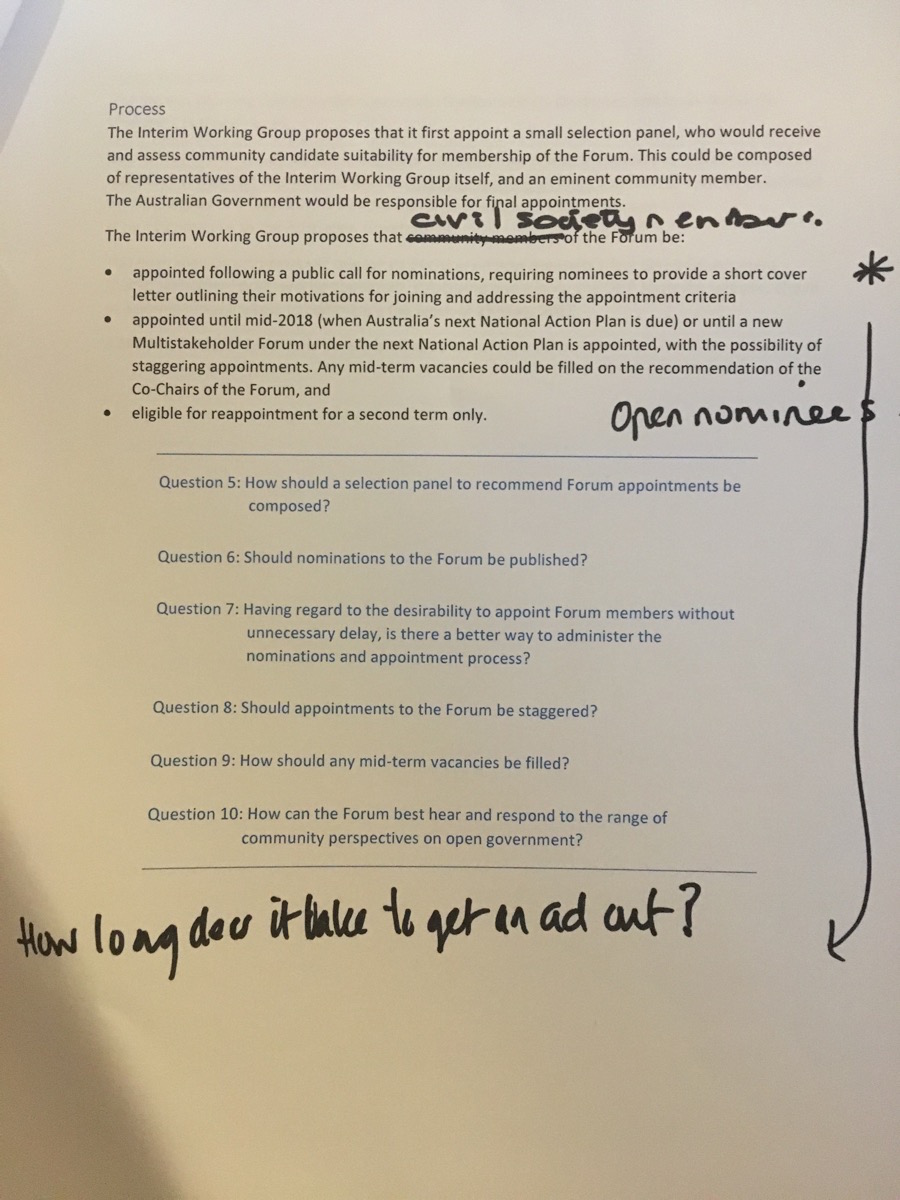 some of the proposed changes

If you participated in the workshop on the day, either in person, via livestream or twitter, please take a few minutes to  answer a few questions by Sunday 4 June, and help improve future Open Government workshops.

In the following two days, in Melbourne and Sydney, civil society members followed up by hosting Introductory sessions to Open Government Partnership with Shreya Basu. In Melbourne Uniting Church provided the venue, with 13 attending from academic, business and civil society backgrounds. In Sydney Shreya and Peter Timmins, hosted a session at the Press Council’s offices where we were joined by workers from a B-Corp, who only work on projects that further one or more of the Sustainable Development Goals and a lawyer/academic.

On Friday in Sydney, Peter Timmins took the opportunity to give the Open Government Partnership a bit more of an airing when the Press Council awarded him with the Press Freedom Medal.  He said: “This is a great but unexpected honour, a tribute to the many individuals and organisations including the Press Council that believe strongly in open, transparent and accountable government and joined the network to seek to ensure the government lives up to its Open Government Partnership commitments. Pursuing reform to improve our democracy is a never-ending journey.”

Katherine Szuminska attended the public workshop and the next day’s meeting as a Civil Society member of the Interim Working group. Government paid for & PM&C staff organised my return flights Sydney to Melbourne, accommodation. They also kindly arranged a light lunch on the workshop day and hosted dinner with IWG members the evening after the workshop. I’m paid to do this work by the OpenAustralia Foundation, an organisation I co-founded to #hackdemocracy.